Everything that initially looks bad … ain’t always bad. Sometimes it turns into a blessing. Take Cleveland for instance …  read how yet another city is coming up with creative ways to solve their problems of declining quality of life  (orignal story here). 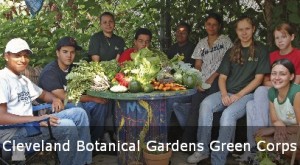 In short, the Cleveland City government has realized it’s time to demolish abandoned homes and buildings and allow residents to grow their own food on the unused land.

Decades of population drain, industrial death and, most recently, the foreclosure crisis have left about 3,300 vacant acres in the city, and at least 15,000 vacant buildings.

The other ordinance sets guidelines for how Mayor Frank Jackson will spend $25.5 million in federal neighborhood improvements funds. The bulk of the money will be used to tear down abandoned homes left behind by the foreclosure epidemic.

One ordinance will allow residents to raise and keep farm animals and bees. It’s a step, proponents believe, toward finding innovative uses for vacant land. “We want people to be able to grow their own food,” Cimperman said.

The ordinance allows residents to keep chickens, ducks, rabbits and beehives but not roosters, geese or turkeys. A typical residential lot could have no more than six small animals and two hives

“You don’t need a ton of infrastructure to produce food,” she said. “You need access to land, water, sun and know-how. That’s not a lot of barriers to entry compared to other start-ups,” said ordinance sponsor, Councilman Joe Cimperman.

Customers at the ever-expanding number of local farmers markets are snapping up so much of what grows in the city that the gourmet chefs who also demand local produce can scarcely get enough.